The sanlock daemon manages leases for applications running on a cluster of hosts with shared storage. All lease management and coordination is done through reading and writing blocks on the shared storage. Two types of leases are used, each based on a different algorithm:

Before sanlock can be used, the user must assign each host a host_id, which is a number between 1 and 2000. Two hosts should not be given the same host_id (even though delta leases attempt to detect this mistake). sanlock views a pool of storage as a “lockspace”. Each distinct pool of storage, e.g. from different sources, would typically be defined as a separate lockspace, with a unique lockspace name.

VDSM is taking advantage of SANLock since Storage Domain Version 3 for the following tasks:

Note: In all the previous Storage Domain Versions SANLock is never activated.

For each Volume present in the Storage Domain it is created a resource and its lease is allocated:

The SPM resource is located instead on the “leases” file/LV with offset 0 (temporary, it will be moved to a different offset to allow a seamless domain upgrade).

The XML that VDSM prepares for libvirt to run a VM on a Storage Domain Version 3 includes all the information required to acquire the Volumes resources:

On connectStoragePool VDSM is acquiring the lockspace on all the Storage Domains that are part of the Pool. The acquired lockspaces are used later on by libvirt to acquire the volumes for the virtual machines. 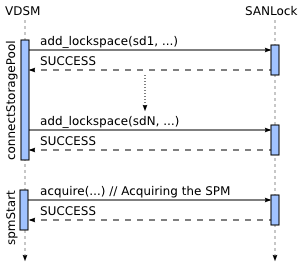 includes all the sanlock warnings and errors from /var/log/messages, plus a record of each lockspace and resource that sanlock has managed.

The amount of information written to /var/log/messages or /var/log/sanlock.log can be controlled with two sanlock daemon command line options:

pri is an integer corresponding to log priorities defined in /usr/include/sys/syslog.h:

So, to write all debug messages to /var/log/sanlock.log, for example, you would use -L 7

The cause of sanlock recovery is loss of storage connection or slow i/o response times from storage. “Storage” refers to the device or file where sanlock leases are written.

The sanlock daemon continually writes to storage at a fixed interval to renew its leases. If sanlock i/o to storage does not complete within a fixed time, the sanlock daemon will enter recovery. Recovery begins with the sanlock daemon attempting to kill(SIGTERM) any pid’s using leases on the affected storage. If any pid does not exit after 10 SIGTERM’s over 10 seconds, sanlock will then attempt kill(SIGKILL). If pid’s still do not exit within a fixed time, the watchdog will fire, resetting the host. If all pid’s do exit within the necessary time, the watchdog will be renewed and will not fire.

Before recovery timeouts are reached, sanlock will log errors related to failed renewals and leases getting too old. If these are seen, it may be wise to reduce the i/o load on storage or the host, to avoid crossing the threshold into an actual recovery.

If the sanlock daemon is killed or otherwise exits while being used, the wdmd daemon controlling /dev/watchdog will log errors, warning that the watchdog is not being kept alive, and will soon expire. At this point it is too late to do anything, and the host will be reset by the watchdog.

The sanlock daemon has a large number of different but intricatly related timeouts. All are derived from io_timeout, which is 10 seconds: the time a single i/o can take before sanlock considers it failed.

The i/o timeout can be tuned, but it is critical that all hosts use the same i/o timeout value. sanlock will not detect if hosts use different i/o timeouts, and this misconfiguration could lead to data corruption. When the sanlock daemon starts, it adds an entry to /var/log/messages which includes the basic timeout values:

This displays the status of all host_id leases being monitored. LOCKSPACE can simply be the lockspace name/uuid. -D includes extra internal debugging information.