This feature enables you to prevent specific VMs on the same logical network from communicating with and seeing each other.

The state of the feature is tracked in [RFE] Private VLAN / port isolation . Related patches can be found on gerrit topic:isolated_port.

There are scenarios in which multiple VMs that share an uplink should not be able to communicate with each other. For example when VMs are owned by multiple customers. The shared uplink might be a connection to the gateway to the outside network or the DHCP server.

In such scenarios, it is required to isolate the network connections of the VMs per port, because filtering on MAC addresses does not address all cases, e.g. Bug 1651499 and Bug 1651467.

Such scenarios can be addressed by creating a VLAN tagged logical network with a dedicated IP subnet per VM, but this is a waste of the limited VLANs and subnets as described by Cisco.

For this reason switches commonly provide isolation per port. There are two popular implementation levels of private VLAN:

The proposed new oVirt feature extends the PVLAN Edge (Protected Port) feature of the switch to the connected Linux bridge on the oVirt host. 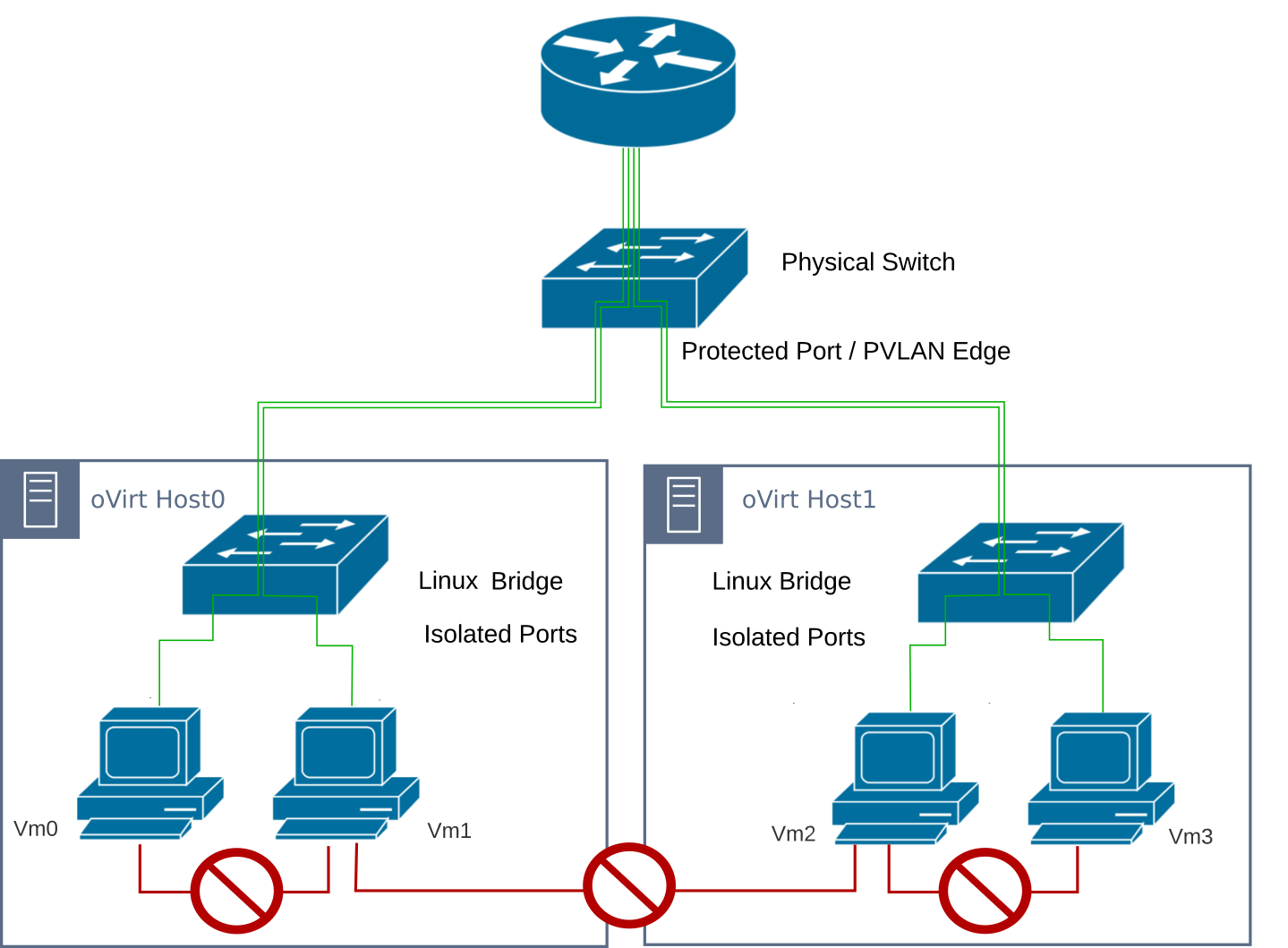 The implementation requires a Linux kernel and libvirt with port isolation support.

The switch connected to the oVirt hosts has to support PVLAN Edge (Protected Port).

This feature will help to reduce the number of required VLAN tagged logical networks.

Logical networks will get a new boolean attribute. This attribute cannot be updated after the network is created. It is not possible to have this attribute on a VLAN profile, because this would result in inconsistent behavior with the switch connected to the oVirt host.

On creating the network, the user can enable this feature for the new, not external, VM networks via REST API or web UI.

If the feature is activated for a logical network connected to a virtual NIC, the libvirt XML definition of the virtual NIC contains the <port isolated="yes"/> element, as follows:

The feature depends on libvirt from RHEL AV 8.3, because this version of libvirt introduced support support for isolated ports.

Engine has to ensure that VMs using this feature are scheduled only to oVirt hosts which provides an appropriate version of libvirt.

The feature will not affect new or existing installations.

to test the feature in oVirt, it is sufficient to ensure that two VMs on the same host are able to communicate with the gateway, but not with each other. For the single host scenario, it is not necessary to configure the switch.

libvirt - Isolating guests’s network traffic from each other