Define special parameters per network, and pass them down to Vdsm hooks when the network is set up on a host.

Just like we can define VM-wide and vNIC-profile-specific custom properties, we would like to set per-network ones. This would allow users to pass special parameters to tweak the way by which Vdsm sets up a network on a host.

Preset property keys will exist for bridge options. These will provide a way for the network administrator to easily set options for bridges which implement oVirt VM networks. In addition, the feature could be used, along with a preset VDSM hook, to specify ethtool options for any host interface to which an oVirt network is attached. It should be noted that ethtool options do not really “belong” to a network, but rather to an interface, therefore the property doesn’t display by default. In the future, it is possible custom properties could be supplied for host interfaces, thereby obviating the need to configure ethtool_opts on a network.

oVirt currently supports a limited set of network topologies: an optional bridge, connected via an optional vlan device to a host NIC or a bonding device.

Users want to allow funkier types of connection, or tighter control on the created devices:

Up until now, oVirt used to persist its network configuration in Fedora/EL specific files handled by the initscripts package. These files, known as ifcfg, contained a series of shell definitions that were read and applied by the ifup-eth executable. oVirt auto-generates and writes these ifcfg files and as such, if the network admin wanted to tweak the BRIDGING_OPTS and/or ETHTOOL_OPTS definition that precluded the continued care-free modification of the network, as some of the configuration would be living only in the hypervisor node and would not be exposed to oVirt for persistence.

HOWTO: configure ethtool_opts on an interface

Voila, you should be done!

The Setup Network dialog would have a list of custom properties for each assigned network (similarly to boot protocol and IP address configuration), to be set by the network administrator. 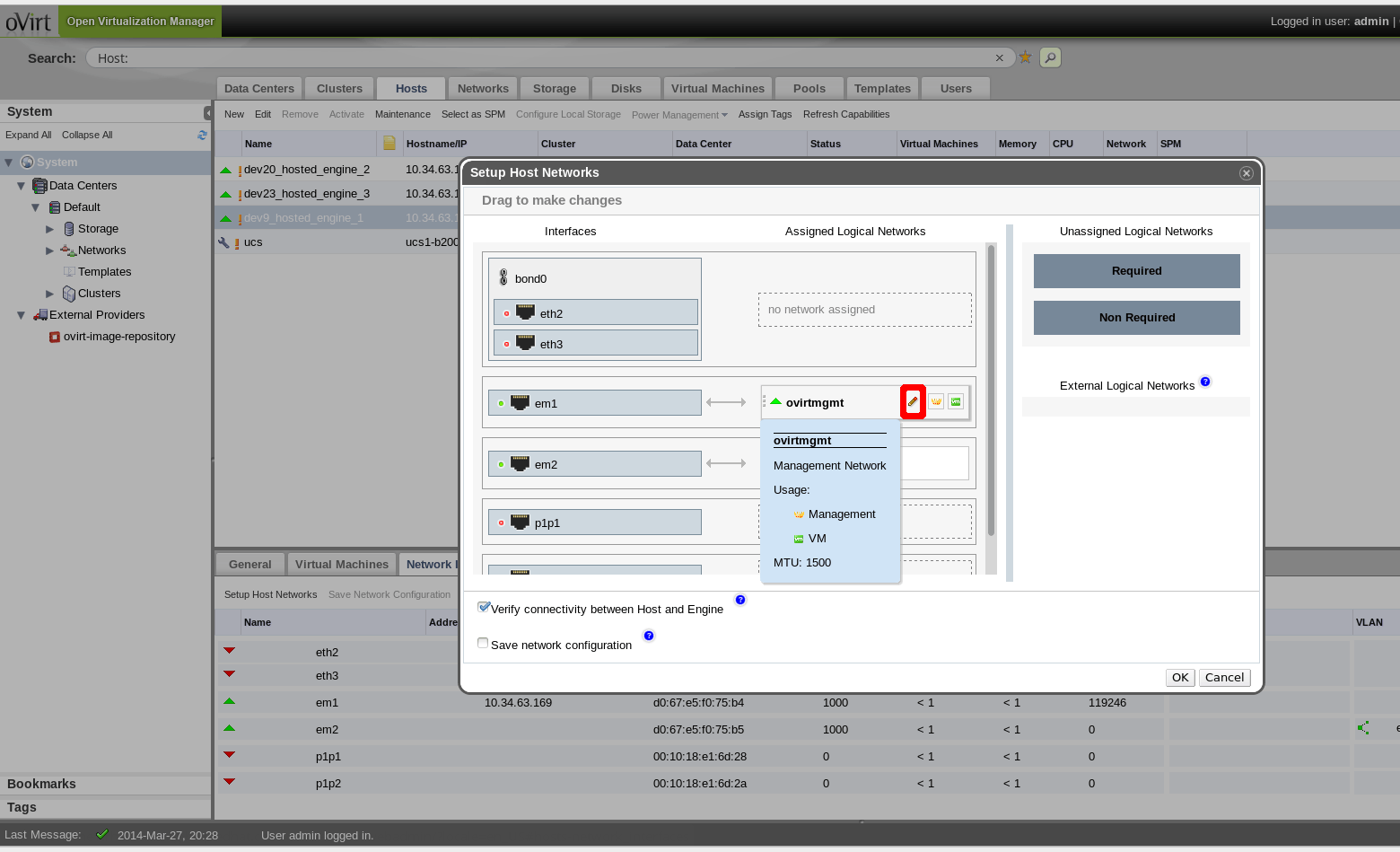 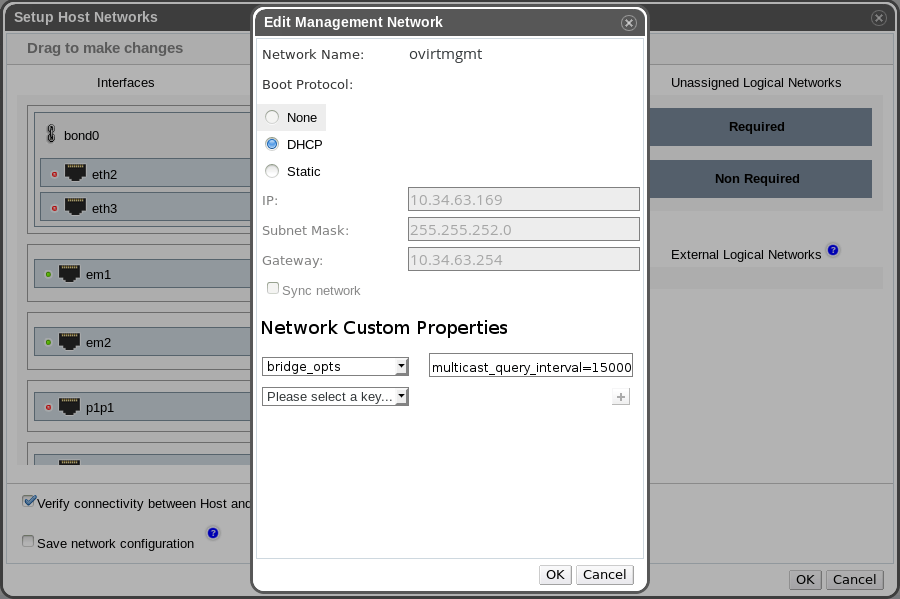 When assigning a network to a NIC it will be possible to click on “edit” (icon marked in red in the first of these two images) and:

Note that preset custom property keys will exist for bridge options (whenever the network is a VM network).

OPTIONAL: As part of the feature it might be a good idea to allow setting custom properties per logical network (on the DC level), and not only on the assignment of a network on a physical device. These custom properties on the logical network will serve as a “mold”, to be used by default when assigning the network to a device. This ended up not being implemented for oVirt 3.5, but might be added in the future. 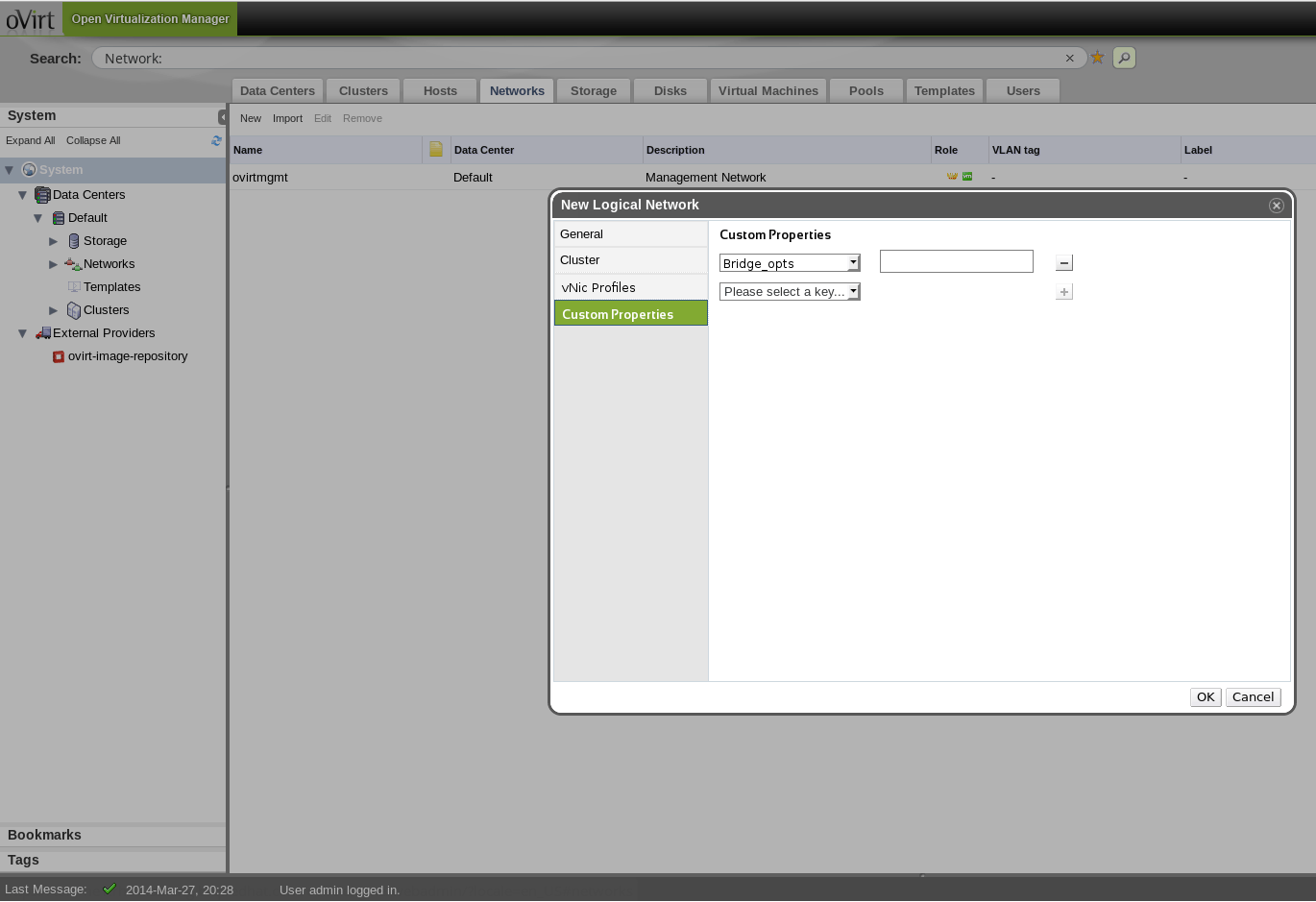 Above you can see that in the networks tab, in the dialog for creating a new logical network, it is possible to define custom network properties, which will include bridge options (for VM networks) by default. These custom properties will be applied upon any assignment of the network to a NIC on a host, unless overridden as described before.

Vdsm would pass the network definition and their custom properties to setupNetwork’s hook scripts.

In setupNetwork hooks scripts, the properties would be passed as environment variables of the hook scripts being executed.

Vdsm could either report the custom properties as part of getVdsCaps or not; it would probably be more consistent with other network properties to indeed report this information.

The proposed format consists on ‘key=value key2=value2’, i.e., pairs of option-value separated among themselves by an equality symbol and from other pairs by whitespace. E.g.:

The proposed format is just the command line ethtool syntax

If the property is being set on a bond, the user should make sure to specify the proper ethX/ethY/ethZ for each of the bond’s nics that ethtool options should be set for. E.g., we have a bond with em1 and em2 and em2 should offload only rx and em1 only tx:

In the bonding case, the UI/Engine/vdsm code may want to check that there is no reference to a NIC that isn’t enslaved to the bond.

VdsNetworkInterface should be extended to include a custom properties member (either String or Map<String, String>), and potentially the Network entity should as well. The CustomPropertiesUtils class could be used virtually as is, but might have to be extended slightly (via a subclass) to accommodate the difference between predefined and user-defined properties.

When executing Setup Networks, the VdsNetworkInterface custom properties member would have to be added as a map to a network’s “custom” entry, as described in the section on VDSM. If the feature is implemented so that VDSM reports network custom properties as part of getVdsCaps, then the member should be reconstructed in the VdsBrokerObjectBuilder class and persisted to the DB; otherwise, it should be persisted before the properties are passed to the VDSM (as is done today with network labels).

Add a custom_properties field to api.xsd for the NIC type:

If the extension to logical networks is implemented (which seems unlikely at the moment), then that entity will have be to extended as well. There will also be a need to modify the Setup Networks command in rsdl_metadata.yaml, but probably not the obsolete add/update NIC commands. Again, if the feature includes implementation of custom properties on logical networks, then the add/update network commands will need to be modified too. At last, mapping between the REST entities and the engine entities will have to be modified.

As this is a 3.5 feature, its related GUI widgets should not be shown for hosts that are part of cluster whose compatibility version is lower. The engine backend needs to take special care at the canDoAction() method of SetupNetworksCommand to disallow custom network properties for 3.4 and below, to also block such operations via REST. Similar care should be taken when hosts are attempted to be moved from a >= 3.5 cluster to a < 3.5 cluster; since there is currently no infrastructure to send a Setup Networks command to VDSM upon cluster change, any non-empty custom properties on the host can’t be wiped, therefore it would probably be best to block the operation.

To test this preset property the tester should:

To test this preset property the tester should:

In the oVirt UI edit custom network properties and, for the key ‘ethtool_opts’ set the command line parameters that one would pass to the ethtool command line application. E.g.:

Note that it is possible to substitute the ethX name of the NIC with a ‘*’ and the hook will fill in the right nic name for you.

======= bonding ======= For bondings there are two options: a) Pick which devices to apply something on (subject to the command actually being appliable with a single ethtool call): If it is for a bond with em1 and em2, it could look like:

b) Apply to all the bond slaves:

This would execute an ethtool process for each slave.