Generate ovirtmgmt network based on DC definitions using setupNetworks and not during new host deployment.

The management network, named ovirtmgmt, is created during host bootstrap. It consists of a bridge device, connected to the network device that was used to communicate with Engine (nic, bonding or vlan). It inherits its ip settings from the latter device.

Why Is the Management Network Needed?

Understandably, some may ask why do we need to have a management network - why having a host with IPv4 configured on it is not enough. The answer is twofold:

According to alonbl of ovirt-host-deploy fame, and with no conflict to my own experience, creating the management network is the most fragile, error-prone step of bootstrap.

Currently it always creates a bridged network (even if the DC requires a non-bridged ovirtmgmt), it knows nothing about the defined MTU for ovirtmgmt, it uses ping to guess on top of which device to build (and thus requires Vdsm-to-Engine reverse connectivity), and is the sole remaining user of the addNetwork/vdsm-store-net-conf scripts.

Bootstrap would avoid creating a management network. Instead, after bootstrapping a host, Engine would send a getVdsCaps probe to the installed host, receiving a complete picture of the network configuration on the host. Among this picture is the device that holds the host’s management IP address.

Engine would send setupNetwork command to generate ovirtmgmt with details devised from this picture, and according to the DC definition of ovirtmgmt. For example, if Vdsm reports:

then Engine sends the likes of:

A call to setSafeNetConfig would wrap the network configuration up.

Currently, the host undergoes a reboot as the last step of bootstrap. This allows us to verify immediately if the host would be accessible post-boot using its new network configuration. If we want to maintain this, Engine would need to send a fenceNode request.

Already reports all relevant network devices, as well lastClientIface (the interface used to receive the current client communication). According to this information, Engine can deduce the structure of the management network ovirtmgmt.

Already has VDSM/managementBridgeName environment variable defined. If missing, no management network would be created.

Most of the work lies here, where the output of getVdsCaps should be parsed, and a setupNetworks command should be transmitted after a new host is added to the data center.

Still needs TODO: drop bridge-creation logic from ovirt-node. There is an open bug for ovirt-node for allowing bridgeless networks: Bug 967866

The updated host installation flow is described in the chart below, where each flow ends with setting the host status to reflect the current host status: 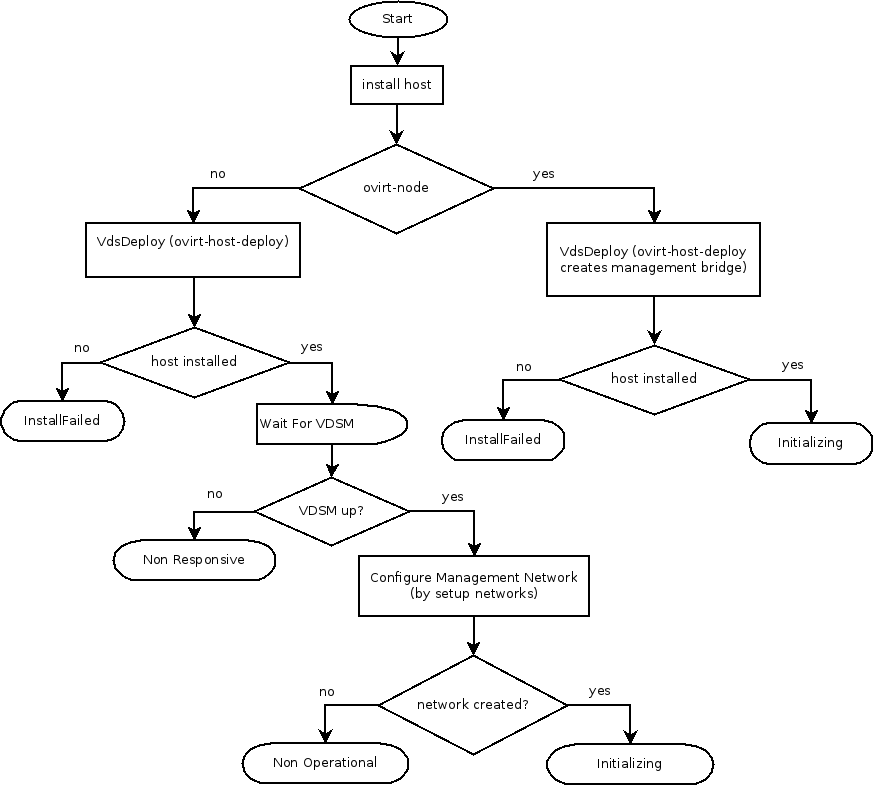 The noticeable changes from the previous installation flow are: * We added support in creating a bridgless management network during installation.

Cover all methods for installing a host in oVirt Engine