The goal of this feature is to allow using OVN provided networks from within oVirt, using the external network provider mechanism. oVirt users will be able to use/define logical overlays from within oVirt, and provision virtual machines with network interfaces connected using these overlays.

The progress of the feature is tracked on Trello

This feature will add SDN (Software Defined Networking) support to oVirt. oVirt VMs will be able to use logical networks overlays defined by OVN.

A detailed description of OVN can be found here: OVN Integration

OVN components can be divided into two groups:

The OVN databases can be accessed using a python API, which is part of OVS (python/ovs/db/idl.py).

Each oVirt host (chassis) needs to have OVS along with OVN controller installed. An OVS integration bridge must be created on the host. This bridge is used to connect all OVN managed NICs. Each host is identified by its “chassis id”. This chassis id is used to route the network traffic to the appropriate host.

The oVirt OVN provider is a proxy between the oVirt engine and the OVN North DB. The provider implements the OpenStack Rest API to allow it to be used by oVirt using the external network provider mechanism. REST queries from oVirt are translated into appropriate OVN database queries.

The provider handles the following requests:

The oVirt OVN provider must be located on the same host as the OVN central server.

When an OVN port (added by the provider) is plugged into an OVS bridge, OVN Controller will retrieve information about the port and the logical network it belongs to from OVN south DB, and create the required open flows on the local OVS switch.

The OVN controller will also update the binding tables on the OVN south DB, causing all other OVN controllers on other hosts to update their open flow tables, to allow connections to the newly added port (if ports belonging to this logical network are present on this OVS switch).

The oVirt OVN VIF driver will also take care of providing the data about the OVN ports needed by the GetCapabilites VDSM command.

The GetStatistics VDSM command needs to be checked.

The driver must also protect the OVN switches, OVN ports and host NICs used for OVN tunneling during the SetupNetworks command.

The oVirt OVN VIF driver must be located on each oVirt host which supports OVN. The VIF driver is invoked by VDSM hooks, contacting the OVN databases to fetch the required data and updating the hook XML passed libvirt or the oVirt engine.

The following vdsm hooks will need to be implemented:

The provider provides a list of existing entities. A list of all entities can be obtained using the command:

The provider will list the networks and ports in separate REST queries.

To remove an oVirt network, the equivalent logical switch record must be removed from the OVN north db. This is done by removing a record from the Logical_Switch table (equivalent of command: ovn-nbct ls-del <network-name>)

The OVN representation of an oVirt vNIC is a logical port. When a NIC is added in oVirt (just added, not plugged in), a logical port must be added to the north db (we will actually use lazy initialization and create the port just before the port is plugged in).

The is added by adding a row to the Logical_Switch_Port table in the OVN north db and associate it with the mac address of the oVirt NIC by setting the appropriate value in the record. Equivalent of commands:

As a result OVN will make the corresponding updates to the OVN Southbound database, by adding rows to the OVN Southbound database Logical_Flow table to reflect the new port, e.g. add a flow to recognize that packets destined to the new port’s MAC address should be delivered to it. A record in the Binding table is made except the column that identifies the chassis. OVN controllers on the hosts will see the change in the southbound db, but will take no action until the lport is actually plugged in (the vNIC does not exist yet, so there is no need to act yet).

To remove an oVirt vNIC, the equivalent logical switch port record must be removed from the OVN north db Logical_Switch_Port table. This is the equivalent of:

When a NIC is plugged in (vm is powered on, or an unplugged nic is hot-plugged), the NIC must be added to the OVN integration bridge. This is task is performed automatically by libvirt, if the vNIC xml is appropriately modified. This is done by adding the following section to the xml:

The value of the “bridge” attribute of the “source” element is the OVS switch to which the vNIC should be added. The “interfaceid” attribute of the “virtualport/parameters” element is the name of the OVN logical switch port which should be associated with this vNIC, and sets the value of the “external-ids:iface-id” column in the logical switch port record. The complete xml would look as follows:

This is the equivalent of executing the following OVS commands:

OVN controllers on different hosts notice the updated chassis id in the binding, and knowing the physical location of the port update local OVS flows. 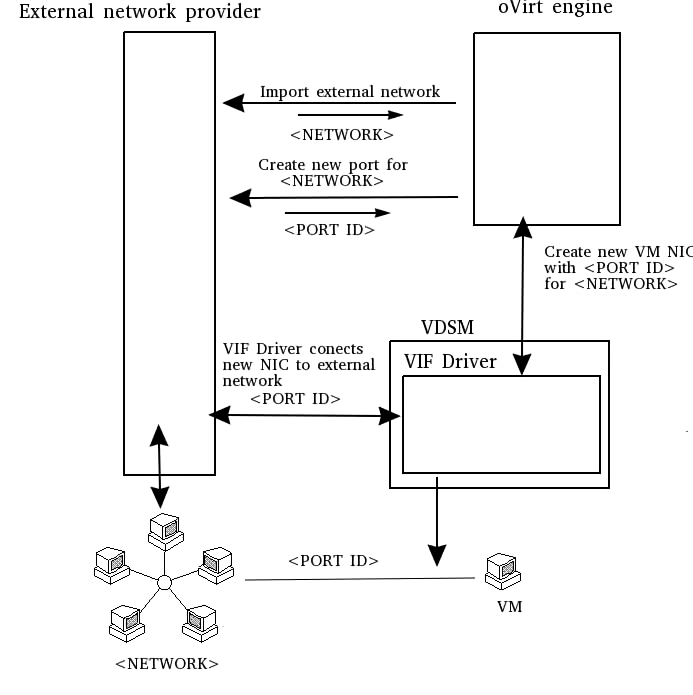 When a vNIC is unplugged, libvirt will automatically unplug the port from the OVS bridge. This is the equivalent of executing the following OVS command:

This deletes the port from the OVN integration bridge. OVN controller modifies the local OpenFlows on the host and deletes the chassis id from the bindings. Other OVN-controllers notice the binding change, and update their local flows.

Authentication of the provider

Authentication and Authorization at the provider

The oVirt OVN provider is able to authenticate users and authorize requests according a minimal subset of the OpenStack API. The procedure is that the client authenticates itself to get a token, which has to be used in the subsequent requests.

The behavior of authentication and authorization is defined by the plugin chosen in the provider’s configuration.

Authentication is implemented by a single request of the OpenStack Identity API v2.0, commonly known as keystone API.

The provider handles the following request for authentication:

The X-Auth-Token HTTP header in every request to the OpenStack Rest API is used to authorize the request. If the authorization is given, is up to the configured plugin of the provider.

There are various plugins available, which differentiate by their behavior. Supported are the plugins to authorize by username or group membership:

Other plugins exists, but they are not supported:

The OVN central server must be installed manually. It must be accessible via network to the OVN provider and to all the hosts which use OVN.

The OVN Controller must be installed on each host using OVN. After installation the OVN controller must be configured with the value of the OVN central which it will be using and the local IP used for tunneling. This could be automated using an otopi plugin, but this would require a one-time configuration of the plugin. A way to establish the tunneling IP on the host should be provided, as well as the IP of the OVN central. A look at the plugin directory might be helpful to understand the process: /usr/share/ovirt-host-deploy/plugins/ovirt-host-deploy

Another possibility would be to to use vdsm-tool configure.

The OVN controller will probably be installed together with the VIF driver.

Note that running oVirt engine, the provider and OVN north DB on different hosts is possible, the most common scenario will be running all three on the same host.

The VIF driver RPM could be made available in the VDSM repo, or a local repo available to the hosts. It could then be installed by being added to: /usr/share/ovirt-host-deploy/plugins/ovirt-host-deploy/vdsmhooks/packages.d/ All RPM files specified there will be installed on the host during the host deploy operation. There should be a separate file for each linux distribution. The file extension must be the name of the linux distribution on which the rpm’s are to be installed (fedora, redhat, …).

The provider and driver will need to access various system resources with limited access, such as sockets, network and file access. The following items must be taken care of to allow this:

The IP assigned to OVN managed NICs is allocated from a subnet (pool of IPs) defined within OVN DHCP server.

We must ensure a minimal NIC downtime during the live migration process. The switch over from the ports on the source and destination host must be as quick as possible and also synchronized with the switch over of the VM itself. The following BZ has been created to describe and track this issue: OVS bugzilla

The current plan for high availability is to run northd on the Engine host, which can be highly-available via hosted engine. We hope that OVN gives us high availability so that northd can be run on any chassis.

Items which will be tested once the appropriate OVN functionality is available: