The user presentation of the live merge feature is simple - the only noticeable change is that the ‘Remove’ snapshot command is no longer disabled when a virtual machine is running. Behind the scenes, however, the flow is quite complex. Live merge is an asynchronous operation, and maintaining the consistency of management meta data and actual virtual machine storage requires delicate handling of many different error scenarios. The following is a detailed description of the flow and processes that need to be in place on both the engine and on VDSM. See the flow diagram below for a graphical overview of the processes.

The next phase of live merge is a polling phase conducted by the engine. As long as the VDSM getAllVmStats API reports a job with a matching jobID, the job is assumed to be ongoing and engine just waits. VDSM is careful to save a record of the block job in the virtual machine recovery file so that polling will maintain consistency over VDSM restarts. Because the block job is part of the qemu process, any action that causes a virtual machine to go down will abort all block jobs for that virtual machine. Once the job is no longer reported, the engine enters the final phase of the job, which resolves what happened and cleans up.

On the VDSM side, the live merge operation is performed by the running qemu process and is monitored by libvirt for completion. If it completes, qemu rewrites the qcow headers in the volume chain to reflect the new situation. For example, if the original chain was A<–B<–C where A was the base image and C was the active layer and B was merged into A, then qemu would update the qcow header of C to change the base image from B to A. Until this header change is atomically applied, the merge is considered to have not happened at all (even though some data may have been copied from B into A). VDSM determines what synchronization is required based on how the volume chain reported by libvirt in the domain’s live XML has changed. For example, if a volume has been removed from the chain, it should be removed from the VDSM representations of that chain. It should be noted that as soon as a merge begins (and until the merge is successful), the snapshot being merged into cannot be previewed or reverted to. The engine must take care to track this limitation to prevent data corruption. When a block job ends successfully, VDSM must synchronize its internal state with qemu and the new image chain. On the virt side, we must update the virtual machine conf to reflect the new volume chain. We do this by checking the volume chain as reported by libvirt in the live domain XML. On the storage side, we must update the volume chain metadata that is maintained on the storage itself.

The command must be resolved after the job is reported to have ended. Engine resolves the command by retrieving the VmDefinition from VDSM and examining the volume chain. Engine will perform a membership test for the snapshot volume UUID against the VDSM returned list to see if the snapshot has been removed from the volume chain. If not, then the merge is marked failed and the disk snapshot will be unlocked by engine. If the snapshot has been removed from the chain then the engine submits one final delete command to VDSM to remove the no longer needed volume from storage before returning successfully.

Special case: Merge the active layer into its parent

The logic for active layer commit is a bit more complex than the basic case of merging an internal snapshot. For active commit, libvirt manages a two phase process. In the first phase, qemu copies data from the active layer into its parent. It also mirrors disk writes to both the active layer and its parent. The completion of this phase can be observed when the libvirt block job ‘cur’ cursor value equals the ‘end’ cursor value and the block job type is active commit. The second phase is triggered automatically by VDSM which issues a special virDomainBlockJobAbort call. Phase 2 ends as normal when the block job is no longer reported.

If the virtual machine disk resides on block storage and the volume where data is being merged is sparse, then it may be necessary to extend this volume periodically during live merge. This operation is an extension of the normal SPM Mailbox driven flow which up to now has only extended the active layer. Candidate volumes are found by using VDSM’s cached block job information. If the remaining space is too small, then a resize request is sent to the SPM. Note that the formal libvirt API for this has not yet been defined but it should be soon.

Detecting if Live Merge can be supported

This diagram is a bit out-dated. Please bear with the developers until they can update it. 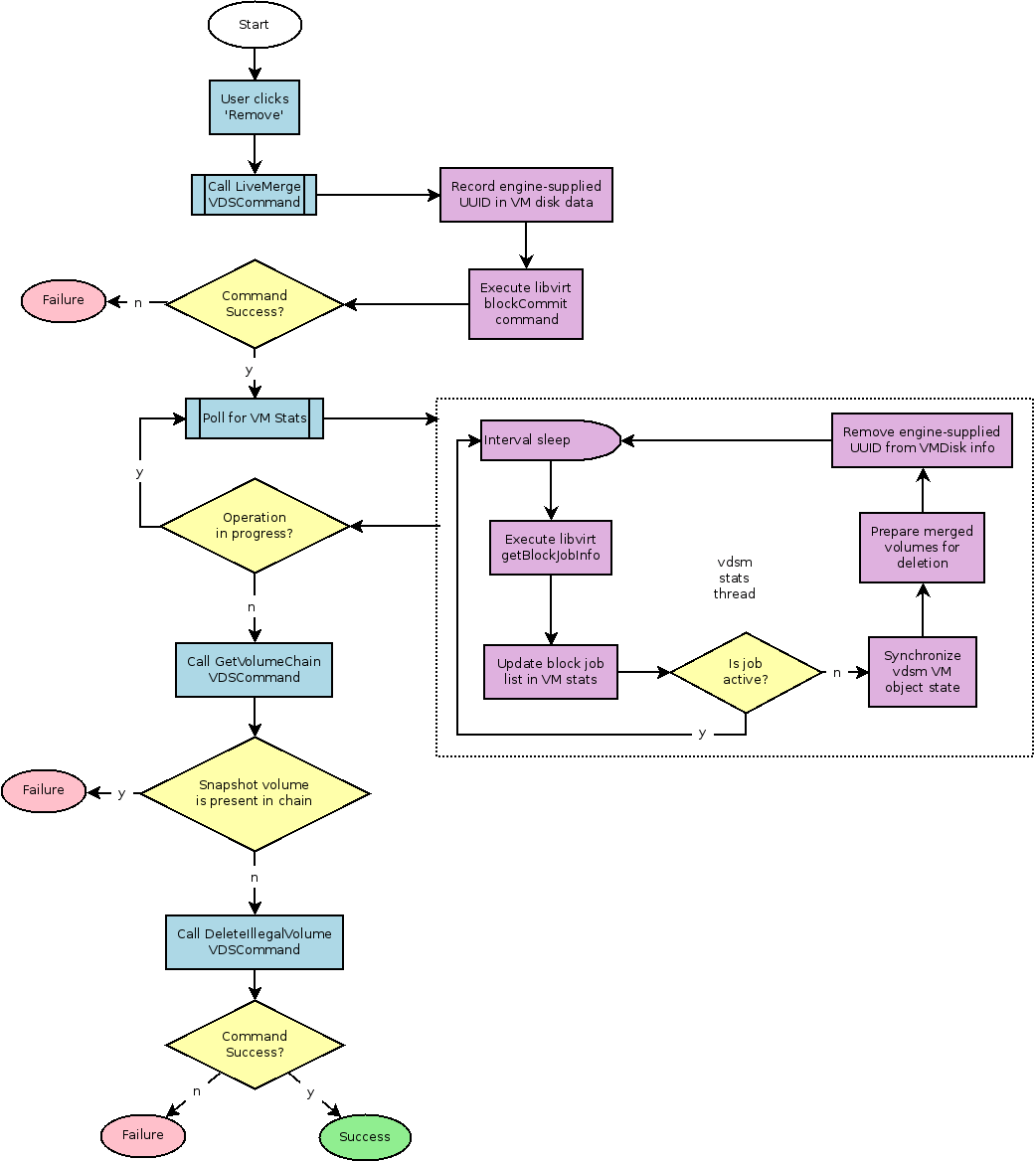 This feature hides the complexity of the Live Merge flow behind a simple “Delete” button in the user interface. This results in symmetric create/delete snapshot operations regardless of whether the virtual machine is running or not. This feature has been actively requested by users.

Some of the libvirt and qemu features required to enable live merge in oVirt are not yet present in official releases. Vdsm will refuse to perform a merge unless a fully featured kvm stack is installed. To try this on your system, please update your Fedora 20 system according to the following instructions:

We have an open blocker bug for returning internal volume high write watermark information from libvirt. Until this is fixed, vdsm will refuse to initiate live merges for disks on block storage. For now, please test with file-based storage.

Due to this bug, libvirt will fail to perform live merges due to a problem with the SELinux policy. To work around the problem, set your host to permissive mode (setenforce 0).

Positive flow (Create and remove a snapshot while a VM runs)