Open Virtual Appliance (OVA) is a package that contains the different elements of a virtual machine (VM). OVA is typically a tar archive file that includes the configuration of the VM in the form of the Open Virtualization Format (OVF) as well as virtual disks and other VM-related data.

OVF is a known format that is used by different organizations and virtualization platforms. Its specification can be found here. The OVF standard provides an open, secure, portable, efficient and extensible format for the packaging and distribution of software to be run in virtual machines.

Recently, oVirt was enhanced with support for importing OVAs that were generated by VMware. oVirt also makes extensive use of the OVF standard to describe VM configurations, such as VM snapshots and exported VMs.

The ability to package all the VM data, optionally compressed, in one file eases the processes of backing up a VM and porting a VM to a different platform or hypervisor. Unfortunately, the portability is limited by compatibility issues. Different disk formats, drivers, guest-agents, and OVF structure, hinder the ability to import any OVA to any platform. Therefore, different organizations develop their own conversions tools, like Red Hat’s virt-v2v, for converting VMs from other platforms to their platform.

This feature enhances import VM and export VM processes in oVirt, by making a broader use of the OVA format.

Today, the process of importing an OVA is limited to OVA files compatible with those produced by VMware and requires to make the OVA file accessible, with the right file permissions (vdsm:kvm), to one of the hosts managed by oVirt. It is a cumbersome and error-prone process.

This feature provides a broader and more user-friendly alternative that enables one to upload a local OVA file directly from a client (the client can be a browser or based on rest-api, like the clients supported for the upload-image functionality that was recently added to oVirt).

This feature allows the uploading of OVA files that were generated either by oVirt or by external sources. Officially, the only external source being supported is VMware. In practice, the process could work with OVA files generated by other source, as long as their OVF configuration contains the data oVirt consumes (in the expected form), and virt-v2v knows how to convert them.

Exporting a VM or Template as an OVA

Currently, users are provided with two ways to migrate VMs and templates between environments. One option is to use an export domain. However, this approach is suitable only for migration between separated oVirt environments. Moreover, there is a plan to drop the support for export domains. A second option is to detach a data domain and attach it to another setup. This option was desiged with disaster recovery in mind. However, because of the side effects associated with detaching a data domain, it is less suited to this migration flow.

This feature provides an alternative way for a migration between environments by generating an OVA from an existing VM or template. By encapsulating all VM/template data in a single file, we achieve an improved portability. By being aligned with the common OVA specification (rather than our unique structure of a storage domain), we achieve better compatibility with other platforms.

The OVA file would be stored on a variety of locations: path on host in the data-center, NFS share, etc (we don’t handle mounting the path). TBD: build the OVA on the fly and stream its content using ovirt-imageio. in addition, it will include neither snapshots nor the template that the VM may be based on.

Moreover, this feature enables a running VM to be exported without the need for any downtime. Today, VM shutdown is required.

An Enhancement for Importing OVAs

This feature will leverage the implementation of the planned download-image to provide similar functionality for OVA files (i.e., download a VM/template as OVA on the client’s machine).

The following section describes the high-level design for the different aspects described in the previous section.

In principle, uploading an OVA is similar to uploading an image. However, it is more challenging because OVA is a more complex resource than an image.

The upload process would be implemented differently depending on whether the OVA was generated by oVirt (or more accurately, that the disks within the OVA are of type raw or qcow) or by other source (and thus requires adaptation). In both cases, the user will be able to select a file and then be provided with the VM configuration that allows him to configure the parameters for the import process.

Uploading an OVA Generated by oVirt

The following figure depicts the import process of an OVA that was generated by oVirt: 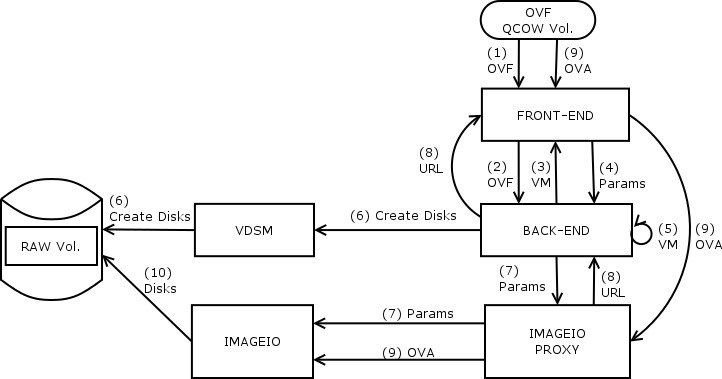 Uploading an OVA Generated by an External Source

The following figure depicts the import process of an OVA file that was generated by an external source: 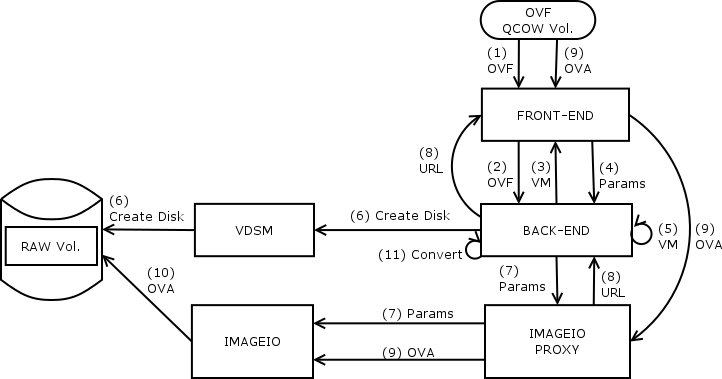 The process is similar to importing an OVA file generated by oVirt, except for the following steps:

Exporting a VM or Template as an OVA

The user will be able to select a VM (or a template) to be exported as an OVA file. In such cases, the user needs to specify a path on a host or a disk on shared storage where the OVA file will be created.

The following figure depicts the process of exporting a VM with a single disk as an OVA file:

An Enhancement for Import OVAs

Importing an OVA that was generated by oVirt won’t involve virt-v2v and will be similar to the upload-ova process:

This part depends on the implementation of the download-image flow. In theory, it should look like this: 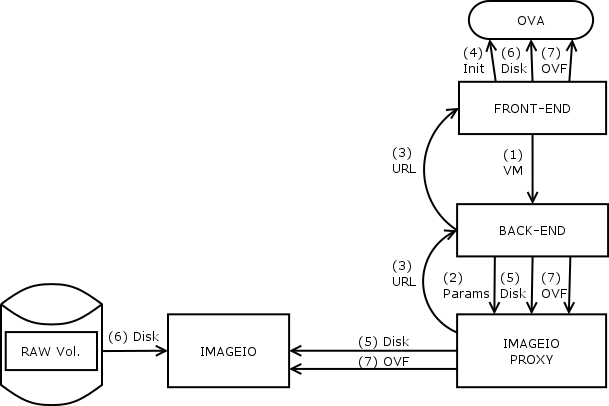 We want to avoid unneeded data copy, to minimize upload/download time. We prefer QCOW as the format for OVA.