This feature allows you to hot plug CPUs to a running virtual machine from the oVirt engine user interface and REST API.

Historically, CPU and memory hot add and remove capabilities were thought of as server hardware RAS features. However, the concepts of CPU and memory hot add and remove are both common and necessary for Virtualized environments. Virtual CPUs and virtual memory assigned to a virtual machine (VM) need to be be added or removed from a running guest in order to meet either the workload’s demands or to maintain the SLA associated with the workload. It is also desired for the rapid reconfiguration of a guest once a workload has been completed or migrated and an administrator wants to reconfigure the VM without having to re-boot the VM.

This feature enables the following powerful use cases:

The term plug/unplug CPUs is simpler from the user POV. The user just needs to set the desired number of sockets he needs. I.e we support a number which is the multiplication of the Cores per sockets and sockets.

All of this means that the user can now simply change the number of sockets of a running VM while its status is UP. This would trigger a call to VDSM to setNumberOfCpus(vmId, num). There is no notion of plug/unplug. 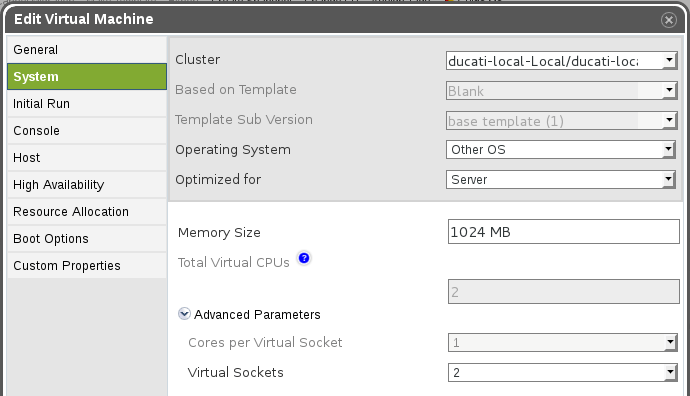 This is a typical update to a VM resource. The number of sockets is changed to 2. This will hotplug 1 more CPU to the machine.

Engine must allow updates to the number of sockets field while the VM is up. When calling the UpdateVmCommand, we will check if the current number is different then the stored number of sockets. if it is we then call VDSM setNumberOfCpus(vmId, num). If we returned with no error, the new number of CPUs is stored into db. The engine view of the actual vCpus of this machine is now syncronized.

A pre-condition for adding more CPUs is that a VM has a MAX_VCPUS set in its xml. This means we have to start the VM with some configured maximum. This number doesn’t affect any reosurce allocation on the VM itself. Till today the MAX_VCPUS was equal to the number of CPUs the VM started with. So its impossible to hot plug more CPUs to machines that started < 3.4 (i.e setup upgraded and the machines stayed UP)

pseudo-code for building a VM xml we send to VDSM

The API to hot plug CPU is using UpdateVmCommand. Essentially if there is a change in topology a child Command HotSetNumberOfCpus will be called. The call to the child command fails atomically and it shall NOT abort the parent UpdateVmCommand.

e.g - we want to update a running’s VM desription and to hotplug 1 more cpu

There is no direct dependency on QEMU’s agent. But for the sake of documenting any detail we have, its worth mentioning that

i.e that the as for RHEL, the guest alone handles the plug/unplug without the need of the agent to do the underling job.

The current VM on the source has n cpus attached and need m maximum to be able to online more. if m1 is the max cores on the the source H1 host and m2 is the maximum on destination host H2 if m1 > m2 the underlying migration should fail?

if we have cpu pinning for cpu 1-4 and we start the VM with 4 CPU and then we offline 2 CPUs and then we online them back - is the pinning kept?

hook support is provided to solve potential problems with online/offline the cpu after the actual addition to the VM system. Its not clear if some linux versions will have the cpu added but offline in the system so the hook is to cover the gap.

Due to libvirt bug on unplug the engine has an inconsistent view of the amount of CPUs the VM has. i.e after unplugging 4 vcpus to 2 vcpus the VM entity in DB has 4 and in qemu process it will decrease to 2

note: VDSM-guest-agent work for reporting this is already in progress - http://gerrit.ovirt.org/23268

(Check what is the maximum number of CPUs, supported on host by getVdsCaps on host).

When running CPU hot plug/unlug, the engine gets acked from qemu-kvm side, even before CPU count has actually updated in qemu-kvm. Therefore, user is reflected that the CPU number was already updated. At this point of time, user can run a 2nd CPU plug/hotplug. Actions

Have a VM with a single CPU, which is fully utilized Actions