Most of them areoutdated, but provide historical design context.

They arenotuser documentation and should not be treated as such.

You may also refer to the simple feature page.

Generally speaking, network QoS (Quality of Service) in oVirt could be applied on a variety of different levels:

The VM level was taken care of as part of the VM Network QoS feature in oVirt 3.3, whereas this feature aims to take care of the host level in a similar manner; it will be possible to cap bandwidth usage of a specific network on a specific network interface of a host, both for average usage and peak usage for a short period of time (“burst”), so that no single network could “clog” an entire physical interface.

Cluster/DC-wide QoS remains to be handled in the future.

It is best take on a hybrid approach, where users could EITHER configure an “anonymous” QoS on a host network OR attach a pre-existing QoS entity. This would probably be the preferred approach, as it provides users with flexibility and accommodates any use case. This is what’s planned for 3.6 - a QoS entity may be attached to the network on the DC level, but the QoS configuration on each host interface may be overridden from within the Setup Host Networks dialog.

A new HostNetworkQos entity will be implemented - it won’t be valuable to re-use the existing NetworkQoS, as we plan to expose a different set of parameters from that exposed by libvirt (as we don’t use libvirt, see VDSM implementation). This entity will extend QosBase, as any other QoS entity. Similarly to other QoS entities, a specific DAO will be implemented to mirror CRUD operations. Commands will check permissions on the DC, similarly to the existing VM Network QoS entities.

Like other QoS entities, HostNetworkQos entities will be stored in the gigantic sparse table qos. Columns representing the exposed parameters will be added to this table - initially these will be linkshare_rate, upperlimit_rate and realtime_rate (but as the VDSM API exposes more configurable values, this could be extended in the future). The HostNetworkQos entities will be referred to, in the form of foreign keys, by qos_id columns of type UUID in both the network and the vds_interface tables. Those reported by VDSM and referred to by the vds_interface table could have a “null” name and filtered out of queries, as they should be of no interest to the users (e.g. they should not be able to attach these entities to a network); they should be maintained (added, removed or updated) when collecting network data from the host.

As for the handling of permissions, it remains to be shown that the current permission model on Network QoS isn’t broken:

The proposed engine-vdsm api is a very fine grained API that allows for more shaping options than will originally be provided. There are three service curves with three components each:

For each of these curves there are three parameters:

With the above definitions, an example networks definition would be:

It’s possible to retrieve the QoS defined for an host’s network with the following code:

the expected result should be something similar to: 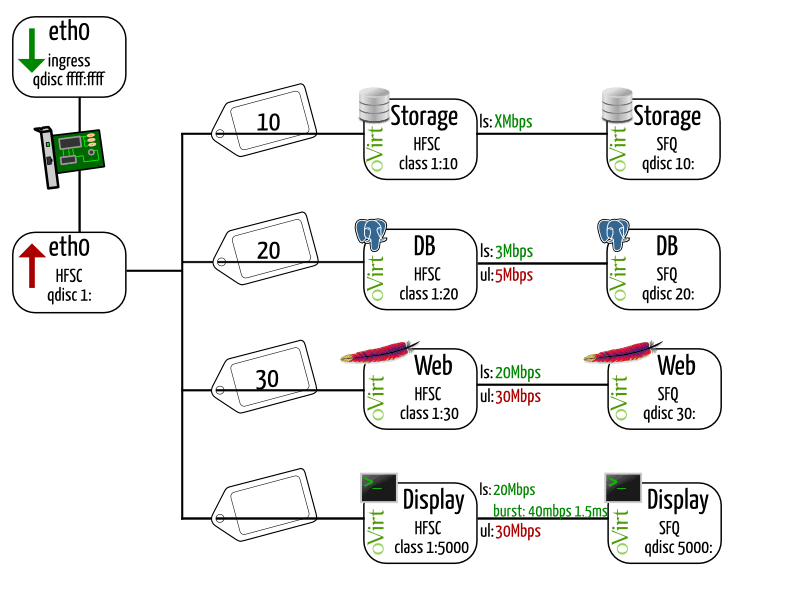 As depicted in the picture, there are four oVirt networks.all the leaf nodes would have an stochastic fair queuing (sfq) qdics to prevent connections from taking all the bandwidth of a traffic class):

All the leaf classes have a Stochastic queuing discipline to guarantee fairness between different connections inside each network. For example for the database network it would look like:

Since QoS API has been added in oVirt 3.5, it will be possible to expose Host Network QoS API as part of this feature. However, as another 3.6 feature will likely be a makeover for the Setup Networks API, it is not completely clear how this feature’s API will be exposed. Assuming this feature will be the first to be implemented, an element of type QoS will be added to both the HostNIC type and the Network type. In the new proposed API, it should be part of a NetworkConnection/NetworkConfiguration (or instead of HostNIC).

Slightly out of date - should be similar, but other values will appear in the dialogs. A new category should appear under the DC/QoS subtab.

As mentioned earlier, to improve the common user experience, we’d like to initially configure Host Network QoS on the DC-wide Network entity. This means adding some ability to configure it in the Add/Edit Network dialog. Since we’d like to start with the ability to attach a “named” QoS configuration, the straightforward thing to do would be to add a list box to the dialog, where users could choose one of the pre-configured Network QoS entities in the DC.

However, we would like to enable users to also create a new Network QoS entity from this dialog, in case they had neglected to create a fitting QoS configuration beforehand (through the DC/QoS subtab). To this end, we could add a button that would allow users to create a new QoS entity. Pressing on this button will open the same “Add Network QoS” dialog as in the DC/QoS subtab, and upon creation of a new QoS entity through it, it will be added to the list box.

The most natural place for configuring “anonymous” QoS directly on one of the host’s interfaces is in the existing dialog for editing networks as they are attached to the host’s interfaces. This is accessible through the “Setup Host Networks” dialog, and clicking the “Edit” icon that appears when hovering over a specific network attached to an interface. Following is a short discussion of how QoS would be configured in that dialog. It is only required to somehow incorporate the QoS widget into the “Edit Host Network” dialog, for example like this (fancier possibilities exist to make the widget less intimidating):

In the “named” QoS approach, the standard work-flow for an administrator to configure QoS on a host network would be as follows:

In the “anonymous” QoS approach, the flow would be as follows: