You may also refer to the detailed feature page.

Generally speaking, network QoS (Quality of Service) in oVirt could be applied on a variety of different levels:

The VM level was taken care of as part of the VM Network QoS feature in oVirt 3.3, whereas this feature aims to take care of the host level in a similar manner; it will be possible to cap bandwidth usage of a specific network on a specific network interface of a host, both for average usage and peak usage for a short period of time (“burst”), so that no single network could “clog” an entire physical interface.

DC-wide QoS remains to be handled in the future.

This feature would help to prevent situations in which two or more networks are attached to the same physical NIC of a host, where one of the two networks is prone to heavy traffic and could potentially overutilize the NIC to the point where the other network(s) don’t function. 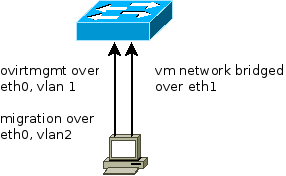 One oVirt 3.3 feature that could specifically benefit from host-level QoS is Migration Network, which enabled to designate a specific network to be used for VM migration, to avoid burdening the management network. For the management network to continue functioning properly, it would likely have to be attached to a different network interface on the host, otherwise migration-related traffic could easily lead to congestion. Being able to configure network QoS on the host level means that these two networks could now reside on the same physical NIC without fear of congestion, as can be seen in the diagram above.

The following steps should be tested: