How thinly provisioned luns were used so far

What could be improved

Suppose that a VM contains a disk disk1 on a block storage domain sd1, and that disk1 is removed. Also suppose that sd1 is built on a 20GB lun, lun1.

This feature is about freeing (discarding) the whole disk space right before removing it.

For whom is this feature useful

This feature is useful for users that have thinly provisioned luns and wish to reclaim space when removing a disk from a block storage domain that is built from them.

A new parameter was added to the vdsm configuration file, discard_enable.
When it is true in a specific vdsm host, that host will issue a blkdiscard command on a logical volume right before removing it. That means that each disk or snapshot that this host removes, automatically triggers it to inform the storage array that this logical volume’s blocks were freed and can be used by other luns in the array.
Note that this option will be dropped in oVirt 4.2 and thus it is not recommended to use it any more. The right way of using this feature is by configuring the storage domain in the engine’s side.

This feature adds a new storage domain property called Discard After Delete.
If all the restrictions are met, a blkdiscard command will be issued on each logical volume before it is removed in two possible cases:

The consequences are the same as those from the previous section, when using vdsm configuration file. The differences between the two are:

Possible consumers of the discarded blocks

After a disk is removed from a block storage domain and its blocks are discarded, anything can use them:

Let lunX be a device and dm-X be its corresponding dm device for a natural number X. Then lunX is considered to support discard iff the value of /sys/block/dm-X/queue/discard_max_bytes is bigger than 0 1.

These two properties are completely independent.
To understand it better, let’s take a look at the flow of removing a disk from a block domain in vdsm:

The administrator should set the discard_enable property in /etc/vdsm/vdsm.conf to true and then restart the vdsmd service.
The value of discard_enable is false by default.

The user should enable the Discard After Delete property of the relevant block storage domain. 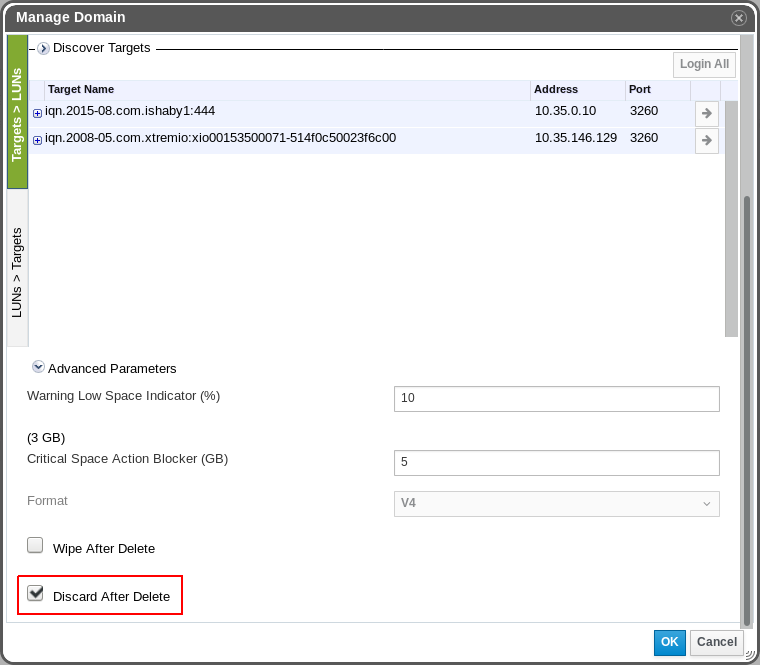