This feature aims to implement the OpenStack Networking API security group in the ovirt-provider-ovn.

By doing so, we allow fine-grained access control to - and from - the oVirt VMs attached to external networks.

The Networking API v2 defines security groups as a white list of rules - the user specifies in it which traffic is allowed. That means, that when the rule list is empty, neither incoming nor outgoing traffic is allowed (from the VMs perspective).

A security group is applied to a logical port - a logical switch port in the OVN model.

Currently, the only security mechanisms present for oVirt VMs attached to external networks are quite crude L2 and L3 protections - MAC spoofing, and IP spoofing - implemented directly by Open vSwitch.

Security groups, which are a traffic white list, complement provided security by specifying which traffic is allowed to and from the resources - e.g. ports - using high level abstraction L3 and L4 semantics.

Furthermore, security groups allow these rules to be applied in fine grained fashion - e.g. the user can specify which rules apply to which ports.

Below, you can find some use cases of this feature:

L2 protection is not in scope of the Networking API security groups.

Security groups, in the general sense, are meant to group together a list of security group rules. They are applied to logical ports, and thus are used to associate a set of rules to a port.

They are indeed a white list - meaning that everything is denied when the list is empty - to which the user adds rules allowing specific traffic. As long as one rule is matched, that particular traffic is allowed.

Security group rules can match on L3 and L4 parameters, specifically on the L3 protocol, the L4 protocol, and destination ports. The remote IP address is also a subject for the match conditions, and rules can be added to allow incoming and outgoing traffic.

The API of security group rules can be found here.

This causes all incomming traffic to the port to be dropped, until the user white-lists the intended traffic for that port.

The user is meant to provision security group(s) and rule(s) through ansible, or using a REST client, targeting the ovirt-provider-ovn.

This greatly reduces the oVirt-engine impact, since there’s no need to implement the REST client side of the API, nor implement these changes in the GUI.

Throughout the remainder of the document, ansible will be assumed as the client, given its descriptive yaml syntax. The os_security_group and os_security_group_rules will be leveraged for this.

Despite the above, ManageIQ can be used as GUI to provision security groups and rules.

The feature will be always active, and it is a matter of identifying the ports that will be subject to the security group filters.

As previously mentioned, the port-security attribute will be used to know if a port will be added to the deny-all port group, having all ingress IP traffic dropped as a consequence.

The port-security attribute is set at port creation time, and its value will be inherited from the corresponding network entity when not defined at port level. Afterwards, it can be updated through the API - at port or network levels.

Existing ports can later be updated, disabling the port-security attribute, which would remove the ACLs that drop all IP traffic to the VM.

As defined in the network port security attribute definition, updating the port-security attribute on a network object does not cascade the value to ports attached to that network - meaning that effect would only apply to ports created after that update. Check the upgrade section for the consequences of this requirement on ovirt-provider-ovn upgrades.

Since the feature is active by default, the intended workflow - from the oVirt engine user’s perspective - is:

The install time required updates are described in the section below.

After the upgrade, the newly created network’s port_security_enabled attribute will default to what’s set in the configuration file, which, unless changed by the user, is True.

On upgrades with existing VMs - having attachments to external networks - the ports will not be updated, and it will be up to the administrator to manually activate port security in the existent ports.

An existing external network’s port_security_enabled attribute will default to False, meaning that security groups will not be applied to newly created VMs attached to existing networks.

Updating the network’s port-security-enabled attribute will not cascade to the existent ports, as defined in the Networking API.

There are 2 types of required security groups, that are created automatically by the ovirt-provider-ovn, when certain events occur. They are:

The ansible representation of this group is:

Since the Openstack Networking API is a white list, the deny-all related rules cannot be triggered from the API itself.

To avoid the need to create the rules beforehand, these ACLs will be provisioned when the first port having the port-security attribute enabled is created.

The ansible module currently does not support updating the port_security_enabled attribute for a port.

To provide the user an integrated experience, ansible should allow for that attribute to be updated.

A bug has been created to track this feature request. Its state can be followed here.

The security group data will be modeled as a port group. This ovn-nb table is only available on Open vSwitch 2.10, released upstream August 20th 2018.

This new table maps a list of ACLs to a list of ports, thus eliminating the need to replicate the same ACL over and over, having the port in the match criteria as the only difference - this way, you match against a group of ports. More information can be found here and here.

The security group information will be encoded in the port group object.

The description of the security group parameters is located at the networking api.

All the security group attributes will be stored in the corresponding port group external ids.

The security group information will be encoded in the ACL object, to which it naturally corresponds in the OVN-world.

The description of the security group rules is located at the networking api.

An OVN ACL has the following attributes:

To achieve the latter, the information that is not directly encoded in the ACL - e.g. protocol, ethertype, ports (both min & max), security group id, remote ip prefix, and description - will be duplicated in the ACL external IDs.

As the software matures, (most of) this information can eventually be extracted from the ACL match clause, but, in the first implementation, the plan is to duplicate it.

Take into account that the ACLs entries will translate directly into openflow entries in the openflow tables in openvswitch.

The direction attribute in the ACL has a very important impact in the openflow pipeline - in which stage of the pipeline processing will the rule be evaluated.

Remember that there are only two different priorities used: one for all drop related ACLs, and another for allow related ACLs.

This means that return traffic from an allow-related flow cannot be changed through an ACL - since it would have a lower priority.

ACLs cannot be attached to all ports

Access to logical switch ports with router or localnet type cannot be controlled through ACLs.

Furthermore, the default Openstack behavior is to create rules allowing ingress for all members of the security group at group creation time - including the default group. This implies that this parameter is key to fully mimicking how openstack behaves.

How to encode the remote_group_id parameter

The OVN address set tables will be used to encode the remote group id information.

The OVN address sets are - as per OVN documentation - a ‘a named set of addresses’.

Each address set can only feature one type of addresses - eth, ipv4, ipv6 - and will be used in the ACL match column. Examples of address sets being used in the match conditions can be seen below.

A reference to the associated port group will be stored on the address set’s external ids.

The relevant events for the remote_group_id parameter - and the actions that take place on each event - are summarized below:

These event will not be integrated in the following section, for simplicity reasons.

The relevant events for the security group feature are listed and explained below.

Adding security groups is done out of band, using either the os_security_group module or a REST client. Through it, the user issues a request to create a security group.

The security group also has a revision_number attribute - also stored in the external ids - that is bumped everytime a change is made to the security group - add / remove rules, update name or description.

A sequence diagram depicting the creation of a security group meant for holding rules to allow incoming ssh traffic is shown below. 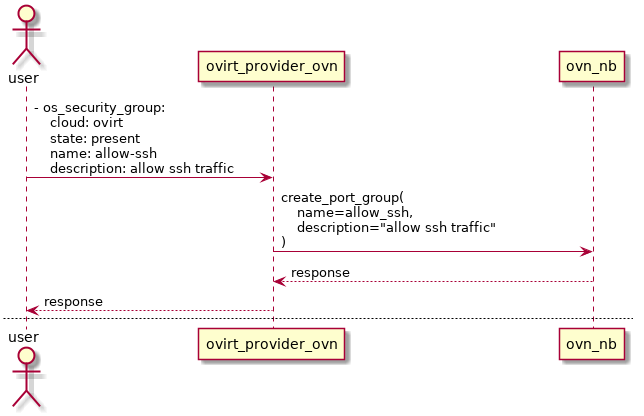 Adding security group rules is also done out of band, using the os_security_group_rules or sending its correspondent REST API request.

All of those attributes are then stored in the ACL external_ids column - along with the description and security group id attributes.

The newly created ACL is then stored in the ovn-nb database, and its data is afterwards translated back into the networking-api syntax.

The security group rules also feature the resource timestamps extension, but the revision number will always be one, since we do not allow a rule to be updated.

A sequence diagram where a user adds - through ansible - a security group rule meant to white list ssh traffic to the security group ‘allow-ssh’ is shown below. 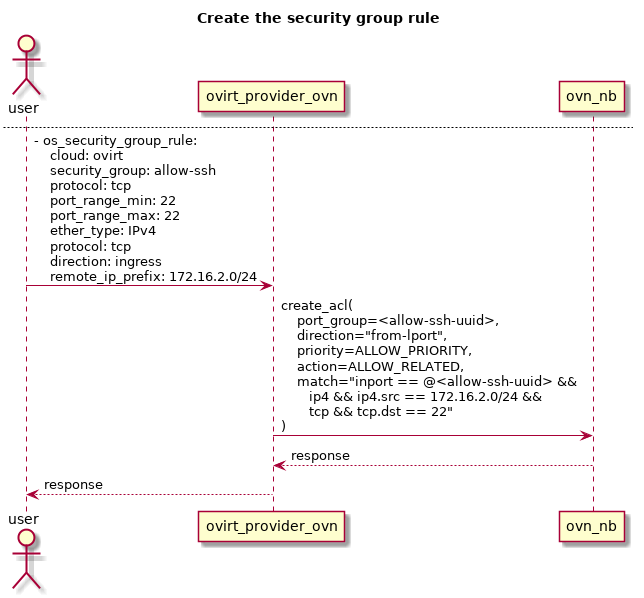 Attach a VM to an external network.

Please refer to the sequence diagram below to better understand this flow.

When a VM is attached to an external network, an ovn logical switch port is created. This port concept is already implemented in the ovirt-provider-ovn project, but does not allow it to be bound to security groups. That support will need to be implemented.

Whenever a port is created, if it has the port-security flag activated, the ovirt-provider-ovn will have to update the deny-all port group data, adding the new port to its list of ports. If that port group does not exist, it will have to be created, and the corresponding ACLs added to it. This port-security attribute is currently not supported in the ovirt-provider-ovn, and thus, will also have to be added to the API.

The list of ports for each of the port groups representing the security groups bound to the added ports will also have to be updated. 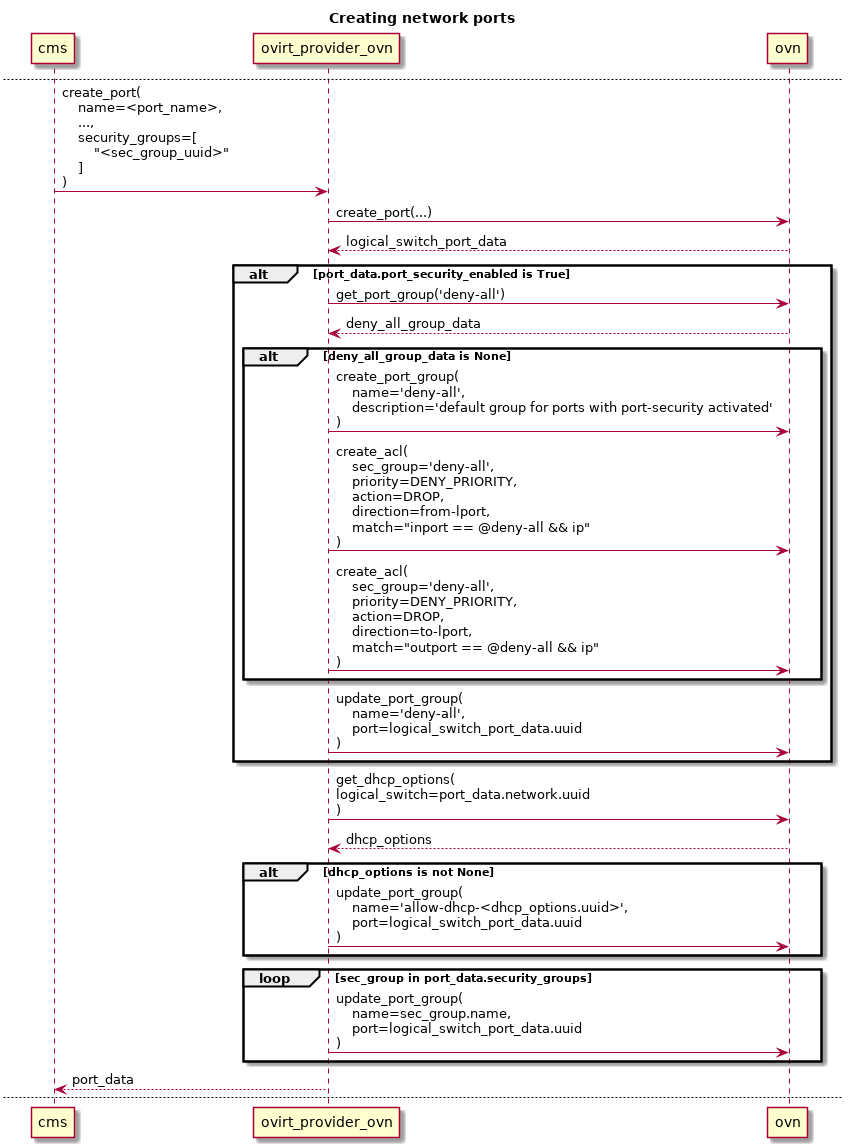 To achieve the intended deny-all behavior, a port group will be created when the ovirt-provider-ovn starts.

It will feature two ACLs, with the following data:

NOTE: these rules will be filtered out by the API, because they are simply not featured in the Networking API. This means that a user listing all security group rules will not see the rules corresponding to the ACLs defined above.

This group enables connectivity between all the VMs whose ports have this group set.

To implement the ingress rules, the remote_group_id parameter is used.

Two rules are created for each direction: one for IPv4, another for IPv6.

It features four ACLs, with the following data:

The following updates to the entities of the current API are required:

The recommended tools to check this feature are ansible and ncat.

Ansible should be used to provision the security groups and the respective rules.

ncat should be used to check the ports on the VM are reachable.

There are 3 main tests: