High level design can be found at Features/HA_VM_reservation

The HA VM reservation feature purpose is to inform the end user on scenarios that a failover of a host might cause a performance downgrade. To do that, the oVirt engine will monitor the hosts on each cluster and raise alerts in cases it uncovers such a scenario. The monitoring will be perform:

For us to begin monitoring the cluster, we need to decide how this monitoring will be performed.

For the weight & balancing functions: The aspects of a VM that are relevant for our monitoring are the amount of HA VMs in host. There is no need to calculate CPU and RAM consumption, this will be handled for us by the other weight functions (evenly distributed, power saving, …).

For the monitoring task: The aspects of a VM that are relevant for our monitoring are the CPU and RAM. Our goal is to determine if other hosts have enough free CPU and RAM resources to take the place of a certain host. When calculating the cpu usage of a VM we will need to take into account the number of cores/threads on the VM and host. The following calculation will return the usage percentage of the VM from the host:

RAM usage will be simpler:

Once we know how to calculate the VM resource, we can monitor it, the following pseudo code will show the monitoring strategy. split the host into HA VMs and will try to find several host that will replace the failover host.

This part is a bit more tricky, we would like oVirt to have the capability of not only monitor the current state of the cluster but to actually make an active decision when running/migrating a VM. by selecting the best host to place the VM.

The scoring method will enable the Ovirt engine to make the best decision to where should the VM run(on which host).

using the already existing mechanism when adding a VM the system do the following:

Enabling or disabling the HA VM Reservation will be possible via the Cluster new/edit popup. A sketch of the edit Cluster window: 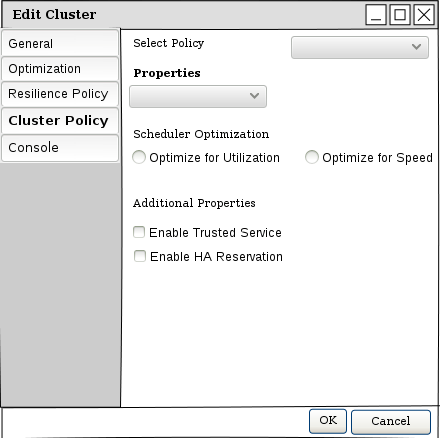 When enabled the weight and balancing methods will kick into action as well as the monitoring task that will trigger an alert to the user when needed.

A second UI change will be at the Alert window, in case the system will recognize the scenario in which a HA VM cannot be migrated after a Host failover without causing a performance downgrade, a new alert will show specifying the problematic cluster and list of problematic Hosts in that cluster.

The message to be presented to the user: Cluster <ClusterName> failed the HA Reservation check, HA VMs on host(s): <Host1, Host2, ...> will fail to migrate in case of a failover, consider adding resources or shutting down unused VMs. The new weight function, “optimal for HA Reservation”, was added to all the default cluster policies, to view or edit the policies go to cluster policies configuration tab in the configure popup windows.

At the cluster popup edit window, the user may select his policy for the cluster. when selecting a policy with a HA Reservation weight/balance function, two parameters could be changed by the user:

The quartz task will be configured in the SchedulingManager class, and set to execute every 5 minutes. since it is a singleton class we will schedule the job at the getInstance method.

Since there is no use of persisting the data, because it is relevant for a short period of time, no DB changes are needed. On the other hand the configuration should be persistent. For each Cluster we will save it own ha reservation selection(true or false)

for saving the configuration we will add a new field to the vds_group “ha_reservation” with a default of false.

possible values for this field are true/false according to the user selection in the checkbox at the cluster popup window (shown at the UI section).

also we will need to add a new weight and balance functions and assign them to all the default policies:

and we will need to register our new alert so user will receive notification emails if selected in the Users -> Event Notifier tab:

A small change to the Rest Api, adding a new property to the Cluster object to enable/disable the HA Reservation, named “ha_reservation” with valid values of true/false.

For this feature there are no changes in APIs to the host and all the logic will be done by the engine, there isn’t any backwards compatibility issues, the feature will be supported by all host versions.